Aubergines have started multiplying by the minute in my parent’s vegetable garden, so I chose the biggest one (which was so big it took two hands to carry!) and happily went off to make some moussaka 🙂

For inspiration, I mainly followed this recipe I found from The Guardian, however as per usual I added a few of my own tweaks along the way! Below is my twist on this recipe, but click here to see the original.

For the white sauce:

Heat your oven to 180 degrees celsius and then it’s time to tackle the aubergine! Cut into slices (make these as thin as possible!), for ease I cut circle and semi-circle slices instead of length way strips. One cut leave to the side. 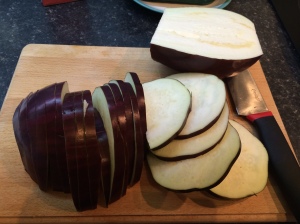 Put the olive oil into a large saucepan to heat; add the onion and cook for a few minutes until softened then stir in the cinnamon and oregano. Now add the mince and keep cooking and stirring until brown on all sides. Now you can add the tomato and red wine. Mix it all together, season and leave to simmer.

Whilst this is simmering you can make the white sauce. Measure the milk into a microwavable jug, and heat for 2 minutes. Whilst this is heating start to gently melt the butter in a saucepan. Once melted, stir in the flour until combined, and then start to slowly pour in the milk bit by bit, whisking constantly until the mixture becomes nice and thick.

Once it has reached a thickness you are satisfied with and all lumps have disappeared, stir in the cheese until melted. Take off the heat and allow to cool slightly before whisking in the (already beaten) eggs and cinnamon.

Now for the assembling! Place a layer of the aubergine slices in a large oven proof dish, then a mince layer, followed by a white sauce layer. Repeat this process until all the mixture is used up, making sure you end with a layer of white sauce. Finally, slice up the mozzarella ball and dot these pieces across the top, with a final sprinkling of salt and pepper on top. 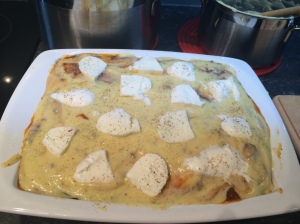 Bake in the oven for about 45 minutes until brown and bubbling. Serve with some fresh green vegetables. Enjoy! 😀 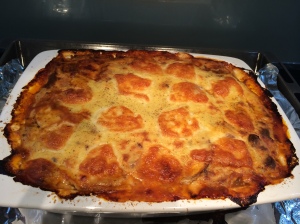 With hungry people to feed and an abundance of vegetables in my parent’s garden, I devised this simple yet delicious recipe one sunny weekend a couple of weeks ago. This is a really easy Moroccan themed one pot dish that’s healthy as well as tasty 🙂

Sit down and enjoy! I had a generous helping of runner beans with mine; however some crusty bread would also go well for mopping up the juices! YUM! 😀